skip to main | skip to sidebar

Homemade $20 super antenna out of paper and tape! 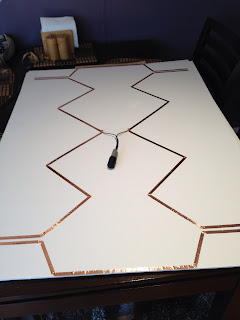 First Attempts
I decided to cut the cord earlier this year once my cable bill started peaking at $220 and Verizon would not work with me. One of the first steps for me was to ensure I could get the important channels (ABC, NBC, CBS, FOX). First I tried the Mohu Leaf, but it was not working out well for me. The Mohu is somewhat of a gimmick in that, yes it is a functioning antenna but no its not magic. Its just another antenna.

Super Antennas
A coworker suggested to me the Gray-Hoverman super antenna. What makes it super? Well it was originally designed in 1959 and it has held two patents which have expired. Since the expiration of the patents and with advances in computers the old hoverman design was modelled and improved with computer software. After years of work and real world testing the antenna design had an extraordinary gain in performance which rivals all of today's commercially available TV antennas. The improved design is available for free under the GPLv3 license.

Materials and Mounting
Most people building this antenna are mounting it on the roof. They use durable materials like copper tube, wood, and PVC. The durability they chose is to withstand the wind, birds, snow, etc. I absolutely did not need any kind of durability other than to have the antenna hold its shape. For my project I chose a foam core board and copper tape. This material choice has many advantages. The antenna doesn't require any special tools, the antenna can be more accurately designed to spec, the antenna weighs next to nothing, and the antenna is flat. Because I needed VHF and I wanted the antenna to be more or less just 2 dimensions I chose the GH0n variation of the antenna. This antenna has a total height of about 41 inches. The largest foam core I could find was 30x40 at staples for less than $10. So I simply taped some cardboard to the top to support the additional inch. While not pretty its still just as functional. The last item needed is a balun (transformer). This converts the two leads in the antenna to coax. You can buy baluns for very little. 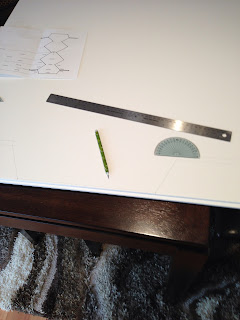 Total cost of this super antenna is about $20 and a little time.

Using a ruler and protractor draw the antenna on the foam core according to my diagram. A pencil with an eraser helps too. 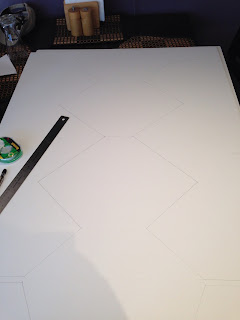 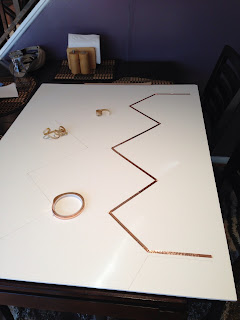 Then with the tape start at one end and tape continuously to the other end folding the tape at corners instead of breaking it. You want to place the tape so the middle of your line is the middle of the tape, not an edge.

There are two areas to pay extra attention to. The first is the 12mm gap in the top and bottom peices. Once taped, this gap should be exactly 6mm(1/4"). The second gap is  dead center where the balun is attached. This gap should be 81mm after its taped. Finally use two wood screws or solder to attach the balun to the center points. The center is represented with the red line. There should not be tape here. In other measurements there is wiggle room incase you don't get it exact. The closer you are the better your performance.

Other thoughts
There is nothing preventing this antenna from being taped directly to a wall behind a TV, a large window, etc. You can even paint over it assuming your paint does not contain metal. The important thing is to point it in the right direction. (Face the entire board virtically with either side toward your TV stations.) You can use a site like tvfool.com to look at the direction of stations to your house. I am directly between two cities and this antenna is good for picking up two directions. 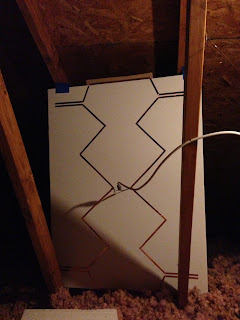 Hooking Up
Hooking up the antenna is easy. Plug a coax cable into the balun and the other end into your TV. Set your TV to antenna and using the menu tell it to auto search for channels. To wire your whole house, you simply need to make sure you separate your internet or old cable feed from the rest of the coax in the house, then wire this antenna into any splitter or coax outlet on the wall. If you have splitters make sure they are in the right direction. An amplifier between the antenna and the first splitter is recommended if you notice some TVs don't get a great signal.


Enjoy some free TV! Special thanks to the ARD forum on DigitalHome.ca and nikiml.

My Diagram made using nikiml's site and MS Paint for quick markup. 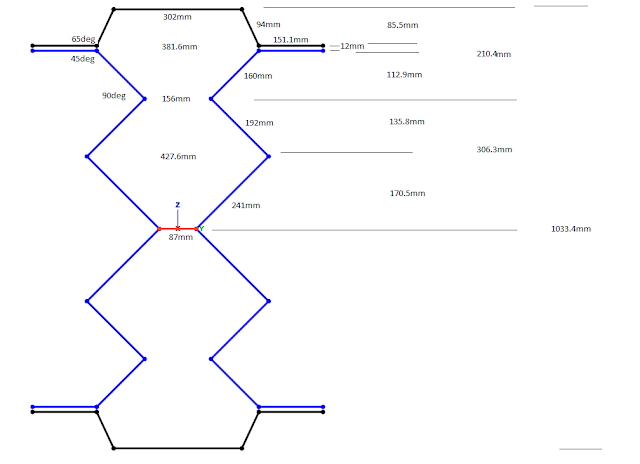